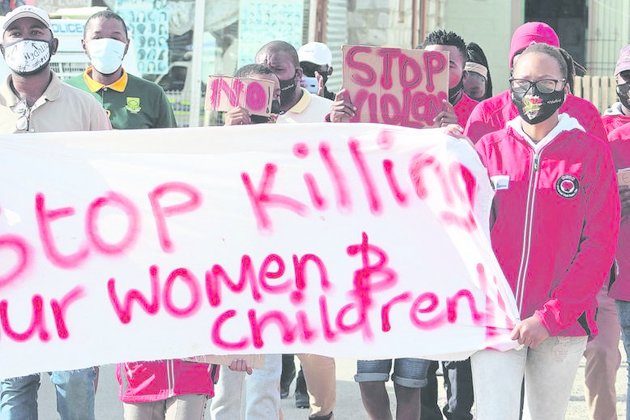 OPINION | What is being done about the second pandemic?

In his speech to the nation on 17 June, President Cyril Ramaphosa said: As a country, we find ourselves in the midst of not one, but two, devastating epidemics. Although very different in their nature and cause, they can both be overcome - if we work together, if we each take personal responsibility for our actions and if we each take care of each other.

The figures say it all: during 2019, almost 250 million women and girls between the ages of 15 and 49 suffered violence (physical or sexual) at the hands of an intimate partner. In an opinion piece written just after the speech, law professor Omphemetse S Sibanda proposes legal and state-driven initiatives that could be instituted or beefed up to aid in this fight. He argues that men need to change their mindsets, and the cultural practices and givens that underpin gender-based violence need to change.

All well and good, but I want to argue that there is a much more fundamental shift that needs to happen: women need to gain their true place in society, as genuine equals.

It's all very well to sing along with Helen Reddy, "I am woman, hear me roar", but that roar needs to become manifest in the way we all live our lives. One of the important ways in which this can be made to happen is through encouraging the full participation of women in the economy. The economy touches every part of our personal and communal lives, and what plays out in the business world sooner or later affects the personal sphere.

We have made significant progress in this area, and most corporates have some sort of women's agenda very firmly in their sights. The danger at present is that the other pandemic - Covid-19 - relegates the women's agenda to the backburner for the foreseeable future. In the rush to define the "new normal", in the rush to survive, the drive to ensure women obtain obtain proper representivity and recognition in the workplace can come to seem like a luxury that will have to be postponed, at least for a while.

Not so. The women's agenda intersects with concerns about personal liberty in the most fundamental way as well as with the health of the economy.

Women have a massive contribution to make to the economy, and thus to everybody's well-being. If the women's agenda is side-lined, we all suffer - and it's clear that the economy will need all the help it can get to recover from the body blow of the extended lockdown and the virtual cessation of global trade.

It makes business and economic sense

The issue about women's role in driving economic growth and creating profitable companies has been highlighted extensively. Since McKinsey's ground-breaking 2007 study, which linked gender balance and financial performance, advancing women's economic role has been accepted as a legitimate business strategy.

Perhaps nothing spells out the economic benefits inherent in women's contribution to corporate profits better than the fact that investment funds are beginning to use gender diversity as an indicator when it comes to assessing how investment worthy a company is.

Another McKinsey study found that the US could add $2.1 trillion in GDP in 2025 if all US states achieve similarly high levels of gender parity - this is 10% increase in the expected GDP (obviously before the impact of Covid-19). This GDP growth would in turn generate an additional 6.4 million jobs.

Rsks to the women's agenda posed by Covid-19

First, and perhaps most fundamental of all, it appears that women have suffered more from job losses than men. Women are overrepresented in jobs that are low paid or part time in sectors like leisure and hospitality, education and health and the like. In America, 20.5 million jobs were lost during March and April 2020 alone. According to the National Women's Law Center, women make up 49% of the overall US workforce but accounted for 55% of job losses in April, thus "erasing a decade of substantial job gains for women nationwide".

And, as the United Nations points out, the situation is much worse in developing economies where around 70% of female employment is in the informal sector, which is least likely to be receiving government support during the crisis, and most affected by social-distancing regulations.

A related risk is that promotions and accelerated training aimed specifically at empowering women within corporates and strengthening gender diversity might be put on hold. In the short term, this decision makes sense, but as companies come to terms with the new working arrangements, they should not lose sight of these programmes.

A second risk relates to the shift to working from home. This is naturally playing havoc with work/ life balance, and there is plenty of evidence to back up what we all know: women already shoulder more of the burden of household management and childcare than their male partners. Women are sleeping less in order to find time to get all the work and house-care done; and their ability to conduct themselves professionally during meetings is much more impaired.

Unsurprisingly, a recent poll conducted by the Kaiser Family Foundation suggested that women are suffering more stress than men during the Covid-19 emergency.

All of this feeds into the subtle set of cues and learned behaviours that set women back. One of these is the reversion to traditional gender roles, of course, but a more insidious one is the "confirmation" that women really do put family before career. This belief, says one commentator, means that career-conscious women downplay their family roles at work in order to demonstrate they do not have divided loyalties, and are as ambitious and determined to succeed as male peers.

In the home-working situation, women need to negotiate a sustainable and equitable distribution of household and childcare tasks with their partners as soon as possible, rather than taking the path of least resistance.

What can companies do?

It's time for companies to take stock of the possible impacts of this crisis on many of their strategic initiatives, of which empowering women should be (and usually is) one. As noted above, any specific programmes they have put on hold should be revisited and, if necessary, re-envisaged for the realities of remote working and social distancing.

Unfortunately, retrenchments and job losses may be necessary. HR professionals should do everything in their power to ensure that due weight is given to considerations of gender parity when these difficult decisions are being made.

Perhaps the best antidote to the threats to women posed by Covid-19 is the one that has fuelled much of the progress towards female empowerment: the support of like-minded women. Companies can encourage the formation of virtual support groups within the organisation for their women (and other minorities) during this period. They can also provide links to external support and mentorship groups and platforms.

Yes, the battle against gender-based violence has to play out in the hearts and actions of men, but it won't be won unless it is demonstrably true that women are their equals in power and perceived worth. The economy is where that important condition precedent can be best achieved, and we must recognise its importance.

Play to Win: What women can learn from men in business